This year’s Christmas season has felt exceptionally relaxing, because one year ago, my husband and I were deep within the whirlwind of selling our home and buying a new one. It was the second home I’ve bought, but it was the first after joining the real estate industry in marketing and support 13 years ago. I’ve learned a lot about real estate since then, including every transaction and property has its challenges, even if the home is brand new. But one thing that became clear during my most recent home purchase is how important it is to budget for unexpected costs during the first months after closing.

The home we sold last year was the first house I bought when I was 24 years-old. It was a simple 1970s brick ranch with an attached garage and large shady yard surrounded by live oaks and long leaf pines. It served us well until our family started to grow. The lack of space and separation put a strain on our lifestyle and relationships, and it became clear we needed a bigger home.

When we started our home search, we knew we wanted a home we could grow into, one with room for our daughters to have friends over, my husband to game without disturbing anyone sleeping, and for me to work from home. We didn’t want to be really close to our neighbors and wanted a large lot similar in size to what we had before, which, in Wilmington, is usually in the older neighborhoods. We had to buy within our current school district to stay at the school, and we really preferred being a reasonable driving distance to my mother, who lives in senior housing. All this, combined with our budget, really limited where we could look for homes, and it made me hesitant to put our home on the market.

Throughout all the years of looking at homes, there was one community that often caught my eye. The homes were not new (many were built in the 1980s and 1990s) and the community wasn’t perfectly manicured like some of the gated neighborhoods in Wilmington, but the homes looked loved and the lots were large, and I loved driving through it when I had the opportunity. It was also located in our search area, though no homes there were currently on the market.

Then, to my surprise, one came on the market, and I liked the look of the home in the pictures. But I was still feeling very hesitant about the housing market. My boss (Melanie Cameron) encouraged me to take a look at the home in person, so I did. The home needed work, but the previous owners had already complete some updating. There was new flooring and paint throughout, new kitchen counters, and a new backsplash. Previous owners replaced the polybutylene pipes and made cosmetic upgrades to the bathrooms. The windows looked original, but I was familiar with window replacement, because I had to replace all the windows in our ranch. The porch also needed to be painted, but I’m no stranger to painting. It all seemed within our means, so we made an offer.

…and lost it. Someone had outbid us. So, I moped a bit and thought it was a sign that now was not the best time for us to buy. Melanie decided to ask other homeowners in the neighborhood if they were looking to sell, but no one was ready.

About 10 days later, the contract on the house fell through, because the out-of-town buyer was given a pay raise to stay at his current job and city. With some more negotiating, we were able to go under contract with the agreement contingent on us selling our current home and closing by the end of the year. Our house ended up going under contract that weekend, and we were able to use the inspection the original buyer had already ordered to negotiate some repairs.

Fast forward to after move-in, and we start to realize this home may be more work than we initially thought. Now, I’m sharing this, not to scare people, but because I want other buyers to understand how important it is to budget for unexpected repairs the first year.

The first thing we realized was that most of the windows won’t open. The home inspection pointed out there were some missing latches that need to be replaced to be fully functional, and I hadn’t really thought about checking every single window, because I knew they were old and I thought the home inspector tested them (it was listed in his services on the inspection report). I even saw an open window during one of my visits prior to closing (after we moved in, the lower part of that window fell in on me, so that explains that). I didn’t realize how bad it was until after closing, and I won’t lie, it kind of freaks me out thinking about what would happen if there was a fire. Needless to say, it’s at the top of our repair list.

Multiple issues arose during our first year (many during the first 3 months) of owning the home:

In addition to everything above, plus some small repairs here and there, we’ve also realized that the kitchen cabinets weren’t properly prepared before they were painted. The paint has started peeling and brown is showing through, so that is another future expense.

Having a home warranty really did pay off. In addition to helping with the garage door opener and HVAC units, 2-10 Home Warranty offers new homeowners a credit up to $100 to replace/re-key the locks on your home within the first 45 days of homeownership. If you can, try to negotiate a home warranty into your purchase agreement.

Before you think otherwise, we are thrilled we had the opportunity to move into a larger house in the area we wanted to live in. It’s been lifechanging. Our kids have tons of room to play, inside and out. I have a home office to work in. My husband has his own room to game in. We get to do laundry inside the house. I’ve been able to pull out décor that’s been in storage for years because we finally have room for it. Plus, we have some really great neighbors.

While we had unexpected expenses after purchasing the home, we are feeling confident it was a good investment. While the condition of a home can be improved, the location cannot, and this is a good location. Values in the neighborhood have already gone up significantly in the past year, and we expect it to remain in demand due to the size of the lot and proximity to popular shopping areas and schools.

Remember, a house isn’t just a home, it’s an investment.

So, while you’re budgeting for your down payment and closing costs, remember to leave some financial room for unexpected expenses. You never know what will pop up after closing. Check out this article for some ideas on how much you should budget for home maintenance. 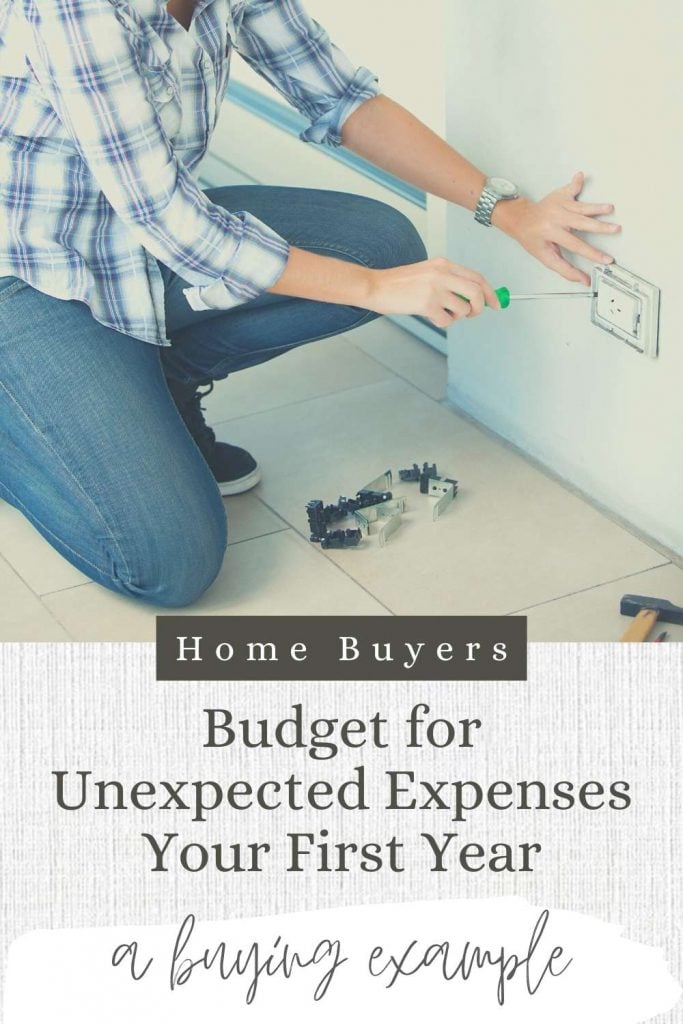