6 Things You Should Know about Flood Zones When House Hunting

Here in Southeastern North Carolina, we are no strangers to flood zones. We are a coastal community located at sea level, smack dab between the Cape Fear River and the Intracoastal Waterway, which is also why Wilmington is a popular buyer destination. We wouldn’t be able to have the beautiful beaches and access to the Intracoastal Waterway without this elevation.

Whether you’re looking to move here or already live here and need to purchase a new home, you’re likely concerned with flood zones. Here are 6 things you should know about flood zones when house hunting in the Wilmington area.

“We Are Not in a Flood Zone”

This is a statement we hear often, and it’s incorrect. Every property is in some sort of flood zone. That means every piece of land has some risk of flooding. So, these homeowners should be saying, “We are not in a high-risk flood zone.” It’s important to understand that, because our area is impacted by hurricanes.

A property may not flood in one storm but may in another. Speed, winds, rainfall (before and during) …they all affect how a hurricane impacts an area and flooding isn’t always linked to the severity of the storm. Hurricane Florence caused a lot of flooding in Wilmington, and it was only a strong Category 1 Hurricane when it hit. Its slow speed and the fact that we had weeks of rain prior to the storm is what caused so much flooding.

Another factor that caused a lot of issues during Hurricane Florence was clogged drainage areas. Water did not have a place to runoff, because residents did not clear out their ditches and community areas had become overgrown or blocked by fallen trees. Flood zones are determined by historical data, so the national flood experts are not always able to predict flooding when these circumstances arise. The worst areas identified after that storm have since been tended to, but we never know when issues will arise in other locations.

All properties in a Special Flood Hazard Area (SFHA) are required by lenders to have flood insurance. These areas include all zones that start with an A or V, because they have been determined to have a 1-in-4 chance of flooding over the course of a 30-year mortgage.

You may see the terms 100-year and 500-year when reviewing floodplains. 100-year means there is a 1% chance that a piece of land will see a flood similar to what FEMA has recorded on its maps. 500-year means there is a .2% chance within a year. B and shaded X zones fall between the 100-year and 500-year parameters, so they have a moderate risk of flooding. C and unshaded X zones fall under the 500-year parameters and are considered low-risk. D zones are undetermined.

A and V zones are determined to have a 1% chance or greater risk of annual flooding.

Flood zones can and will change. Whether you believe in global warming or the natural cycles of the earth, weather patterns are changing. New construction of communities and public projects can also affect water runoff. The flood maps are based on historic data and FEMA may not know the potential for flooding until after it happens the first time.

The average cost of flood insurance in North Carolina in 2020 was $1,515 annually. It’s higher if your home is in an A or V zone, and considerably lower if you are in B, C, and X. Additionally, the level of coverage can also make it increase. Flood insurance is traditionally provided by the National Flood Insurance Program (NFIP), which is managed by FEMA; however, some private insurers are now offering flood insurance and supplemental insurance that covers what NFIP won’t.

By the way, it’s not uncommon for homeowners in Wilmington to purchase flood insurance, even if they aren’t required to. As mentioned above, the costs for zones B, C, and X are considerably lower and normal home insurance usually has extremely limited coverage for water damage caused by a storm.

Home buyers who aren’t used to dealing with flooding or coastal storms may consider high-risk flood zones as a hard “no” when searching for a home to buy. This is reasonable. If you own a home in zones A or V, you must be ready to evacuate during a hurricane and be prepared to make repairs when needed. But that doesn’t mean your home is guaranteed to flood or that these properties are unlivable.

If you want marsh front, marsh view, ocean front, ocean view, riverfront, river view, or similar, chances are the property or part of it will be in a flood zone. Many homes near flood areas are built on stilts with the main living areas up high. This doesn’t mean you don’t need to evacuate during a storm, but it helps protect your investment from flood waters. It’s the trade-off for water access and gorgeous views.

Also, keep in mind that some lots are only partially in flood zones. For example, along parts of Smith Creek, there are lots that fall into AE. Most days out of the year, the lots are dry. The homes are built on the highest part of the lot, which puts them in a safer area when large storms come through and the creek collects rainwater.

If you really love pictures of a home on a lot partially in a high-risk flood zone, we recommend seeing it in person to get the lay of the land. The home may actually be well above the area that’s at risk.

You can view the flood zone, elevation, and potential insurance costs for every property in North Carolina by visiting Flood.NC.Gov and using the search bar at the top of the page. The maps in the Multiple Listing Service (MLS) also have a “Flood Map” layer, which is good for quickly narrowing a search, but the website mentioned above has the most details.

If you would like to avoid homes in high-risk flood zones, make sure to let your real estate agent know, so they can narrow your search. If you would like the name and number for an insurance agent who can help you with quotes for flood insurance, don’t hesitate to reach out to us. We are happy to help. 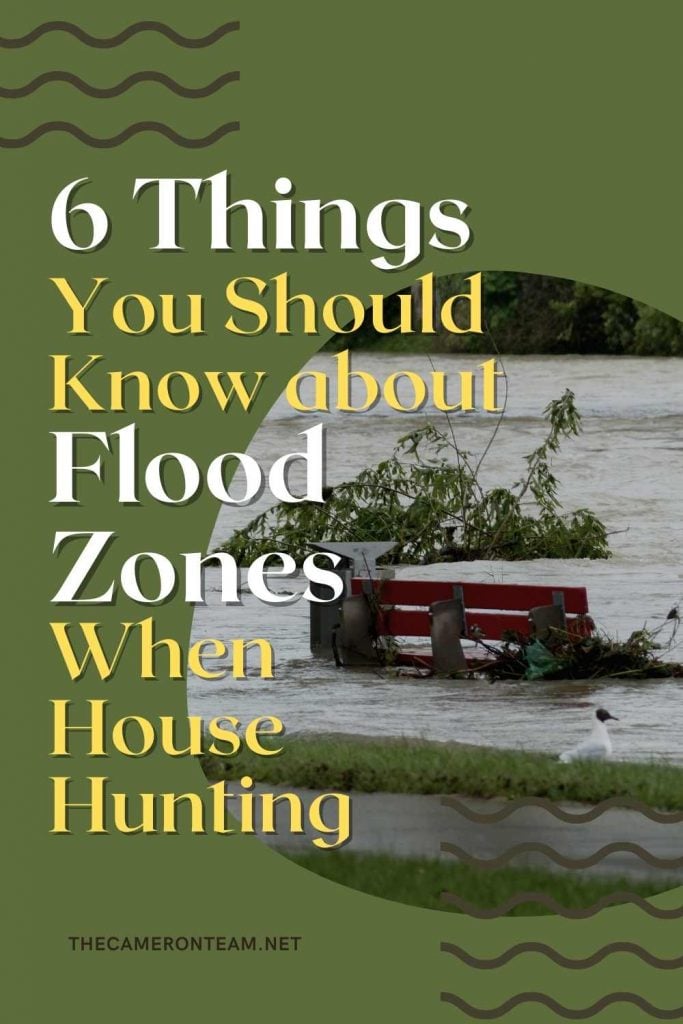