15 Plants and Shrubs for Coastal Carolina

By Meghan Henderson Homeowner Tips May 14, 2015 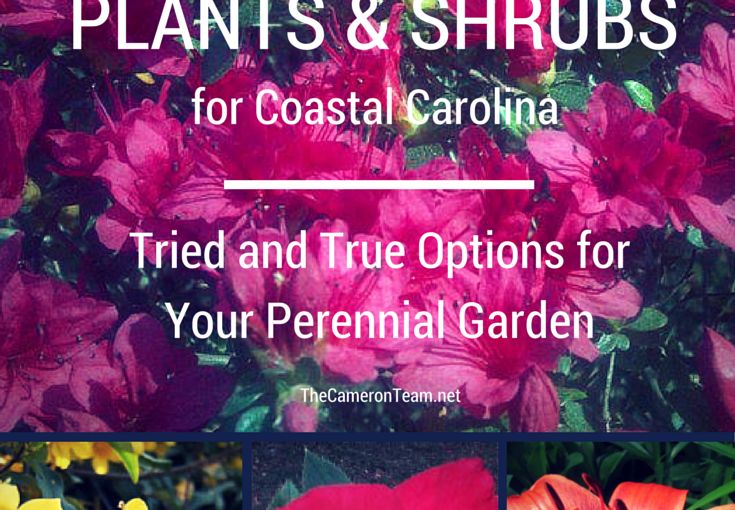 When I moved to North Carolina from Michigan, I had big plans for my garden. The climate in the Mitten State was 8 months of freezing cold and snow, followed by a hot, humid summer. Gardening there wasn’t impossible: I actually had pretty good luck. I had an acre garden with vegetables, flowers, and a pond, but I envisioned so many possibilities in a longer growing season.

Over the course of one year in North Carolina, I learned that this environment was a totally different ball game. The reality first hit me when I went outside to weed my first month and ended up kneeling on a small rogue cactus. No idea how it got there, but it was about 3 inches tall and doing quite well. That should have been a good sign of my coming struggles.

You see, my yard is sand with a layer of dirt on top. That make sense seeing we’re on the coast, but I never anticipated that the lovely dry rock bed feature I installed the first year would completely disappear, swallowed whole by my front yard. If you looked out there now, you would never believe that there were once 4 bags of stone laid out in this short 4 foot by 1 foot area. Matter-of-fact, finding a rock on my property is like finding gold. What a change from living on top of limestone!

Needless to say, I’ve gone through a lot of plants trying to figure out what will grow in my yard. You can’t just go by zones, but soil needs as well, and that isn’t always a guarantee. When it’s dry, it’s REALLY dry (sand drains well) and, when it rains, that doesn’t mean the water will be enough to quench the plant’s thirst, because it disappears so quickly. Then, there are the tropical storms and hurricanes, when everything gets absolutely DRENCHED.

It’s been a learning curve, believe me. So, I thought it would be a great idea to share this vast knowledge I’ve acquired in my struggles….There was a bit of sarcasm in that sentence. I’m still quite dumb in many aspects of plant care, but I did learn a bit through experience while gardening here and working two seasons in a greenhouse in Michigan.

If you’re moving to Coastal Carolina or are new here and are looking to start a garden, here are 15 perennial plants and shrubs that have proved their hardiness in this area:

If you’re looking for annuals, many of the traditional selections work well. I suggest shopping for plants at locally owned garden centers, like The Plant Place, Lewis Farms, The Transplanted Garden, and Zone 8 Gardens. They are more likely to carry plants that will survive in our zone. Big box companies, like Lowes and Home Depot, like to slip in plants that are borderline for other regions, just to make a sale. Also, take special note to consider pansies and flowering cabbage, which work well as color providers during the fall and winter months.

Have a suggestion for a plant or shrub/bush to try? Please share in the comments below.